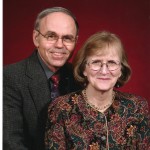 Dr. Roger L Luther, born February 24, 1948 in Elizabeth, Indiana is a pastor, Bible scholar and author. Roger is an ordained Southern Baptist minister and has pastored for more than thirty years in Indiana and Michigan. He earned his Ph.D. in Biblical Philosophy at The International Seminary in Plymouth, Florida and later served on the state “executive board” of The Baptist State Convention of Michigan. In addition, he served on the board of trustees of Southeastern College and The Southeastern Baptist Theological Seminary in Wake Forest, North Carolina for two five Year terms.

Roger served in the US Army; while on duty in South Vietnam, he was awarded “The. Army Commendation Medal.”  He is an avid outdoors-man and photographer, and today resides with his wife, Rita, in Tecumseh, Michigan where they are members of Tecumseh Missionary Baptist Church.

One Response to About the Author